Anyone heard about the Angus Young SG being redesigned by Gibson?

Well, off to the music store to see what kind of prices I can get :-\ This will be the first guitar I hav eever had to finance :oops:

As for the name wearing off, you could just get a clear coat shot over it.

If I was you, I would go for the signed one. If you're already going to spend $4,300, why not just go for the singed one?

As for the name wearing off, you could just get a clear coat shot over it.

I see your logic man, and you may be onto something, but here is my reasoning on not going for the signed one.

For starters, I just plain old like the VOS one better. The vintage one is cool, and they did an amazing job on it, but the one I have seen of Angus' (either on stage... or other places) is in damn near mint shape. Not aged, weathered, dinged like the &quot;vintage&quot; one they made.

Second. Thats a hell of a lot of money for a signature. Especially since I already have a 1961 Re-issue signed by the boys.

Third. $4300.00 is alot of money. Its not stetching me thin, but its definately eating up a good chunk of my play money for a year

The signed one would be a must if I didnt already have one signed. I mean, these boys arent going to be around forever, and thats just a priceless piece of Rock History that has to be handed down to my (eventual) kids. The other thing is, the &quot;aged&quot; signed one will have more of a collectors status for the Gibson/ACDC enthusiests. But I feel I am staying in hte loop by purchasing middle of the road. It will be my first Custom Shop order, and likely one of my last guitars (and certainly my Crown Jewel).

note: I may eat my words on the last guitar bit, cause I am only 25. But this will be my third Gibson SG in the collection. The other two being, 61 re-issue signed by ACDC &amp; a Classic Custom (week 38 of the guitar of the week). But this beauty is all I desire!
S

Angus has been using that guitar live and in the studio for over 20 years now, possibly more. It's pretty beat up, you just can't tell in most videos.

Angus has been using that guitar live and in the studio for over 20 years now, possibly more. It's pretty beat up, you just can't tell in most videos.

Thanks, I thought my reasoning would make sense to someone :)

As for Angus's lightning bolt guitar, I think he has two (maybe more) of them. Because hte one he uses on stage definately has some dings, scratches, cracking etc. But the one he uses in photo shoots, and I believe the one I saw in Vancouver, is in damn near mint condition. So maybe he has a few for promo shoots, or playing in his rooms while the vintage work house stays with the gear?

He is a photo you posted a while ago, and I think this is his &quot;photo/promo&quot; one.

I may be wrong, but just a thought
Z

I can help answer your lightning bolt guitar question! 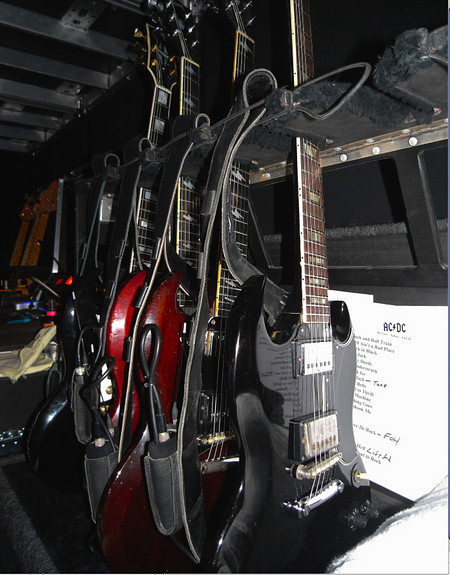 Hope that helps clear some confusion

Anybody know what happened to his Jaydee SG?

Hope that helps clear some confusion

yeah that clears it up some.

I noticed his work horse (the dinged up one) has a rear pick-up ring, and the one in good shape doesn't. But, either way, its clear he now has a few.

Aha, I guess he does use the Ernie Ball RPS strings too, it looks like it in those pics.
S

Great pic ZR! How'd you get it?

I had suspected he had more than one lightning bolt SG because I've seen it with Schaller tuners sometimes, and sometimes Green Keys. I've also seen PUP rings around the bridge only, both PUPs, and neither. I thought maybe he just kept changing it though.

Both lighting bolt SGs in your pic look beat though. So I'm guessing he has three, unless the one he used in the photoshoot has gotten beat from touring.

The Jaydee he only used in, what, '85? Then it probably got stashed away in his collection. He probably doesn't even remember he has it.

Anybody else notice the Black SG Custom with the white PG in the back there? Great to see he still keeps that as a backup. He used once on this tour for YSMANL IIRC.


Anybody else notice the Black SG Custom with the white PG in the back there? Great to see he still keeps that as a backup. He used once on this tour for YSMANL IIRC.
[/quote]

What Show was that???

I see Malcolm still has his White Falcon for his back-up as well.

Malcolm would have to have another White Falcon. His original '58 is hanging up in a Hard Rock Cafe.


I found it on the internet haha. I saw Angus use 3 guitars at Wilkes-Barre. He started with the black 64 standard? Then went to the lightning slash guitar and then to the Custom.

His original was recently sold at a Rock 'N' Roll Memorabilia auction. I doubt that's his REAL original in whatever Hard Rock Cafe you're talking about.

And he indeed still does use it. At Hockenheim this year he brought it out for Shoot To Thrill, which is great because that song was recorded with his original White Falcon.

Pancake: I forget what show, sorry.

I found it on the internet haha. I saw Angus use 3 guitars at Wilkes-Barre. He started with the black 64 standard? Then went to the lightning slash guitar and then to the Custom.

Hmm, didn't know he used the Custom at Wilkes Barre. Surprised I missed that.

Last I heard about the '59 White Falcon of MY's it was on display at a Hard Rock Cafe, and right now I can't remember where. It could have been on loan, and later sold at an auction or after it was sold put on display at HRC. Word is he had a luthier reset the neck work on the electronics and it never played the same again, so he stopped playing it. Like AY, I'm sure he has many White Falcons and Jets, as well as others.
S

The story behind his original White Falcon is very vague. The most common and widely accepted story is that he had &quot;work&quot; done on the guitar and it never sounded the same after that. But for all we know, he could have had several white Falcons in '80-'81 and only the one he used on BIB was ruined.

I know for the Ballbreaker tour he used Gretsch MY Signatures as backups.

The story about MY's White Falcon came from Mal himself in an interview. Not sure where I read it though.
Z

I have reason to believe that Malcolm can afford more than one.....

After highway to hell was released the band was making a lot of money to play festivals and other sorts, so I'm sure he could of afforded a few, but he probably only had one at the time....but now I'm sure he bought one recently I don't think he had one for the Stiff Upper Lip tour....

His Gretsch Jet in original paint