Do you ever bend the neck on your SG like a poor man's whammy bar?

No, but my Pro Kahler kicks all the ASS I need it to.

Not something I do whatever the guitar. It seems tempting fate to try it on an SG. Has anyone seen an actual break result from this?

Buy a brown Sharpie and go at it on those cracks.

DrBGood said:
Buy a brown Sharpie and go at it on those cracks.

Fixed it for ya!

It was barely a week ago that a brought my fixed neck Fender Telecaster (Yes a non bolt on neck Fender, although I believe they were technically made in japan for Fender)

and used the neck flex technique for vibrato when I could.

I prefer a tremolo for the expression it lends & affect it allows me to add to my playing but when going without trem I see nothing wrong with using the guitar anyway that works for you to get the job done, given its the right instrument that you can use & not be too awfully upset if something 'bad' happens!

Anywho, here's a clip where the song was in G & the ending chord beckoned for a little neck flex vibrato!
This one was done by basically only pushing toward my body using one hand on the headstock & the other on the tail end of the body. So it was more like relieving string tension than adding more forward pressure which is a lot less riskier than cranking forward opn a glued in neck!

If you listen for it you can actually hear the strings slap off the frets a bit for a nice added effect as the chord dissipates.

PS.. Its my 1st time posting Sound Cloud so I hope it works for us.

Less then a hundred bucks USD, and a string change. And NO pesky creaking noises or worry.

Bad Penguin said:
Less then a hundred bucks USD, and a string change. And NO pesky creaking noises or worry.

Bad Penguin said:
Less then a hundred bucks USD, and a string change. And NO pesky creaking noises or worry.

I've been meaning to try one & put it through a couple weeks of rehearsals to see how it handles & holds tune.

And some might even say it's kinda strange looking & ugly even! Yikes!

I personally think it 'looks' better on my Explorer than any of the SG's I've had it on. Eye of the beholder eh??

But for me looks take a back seat to functionality but that's not saying good looks aren't nice or welcome either.

And when it comes to looks, those Les Trems don't 'look' too bad at all!
C

I've done it. Recently playing "Wicked Game" in a band with much younger guys than myself, I did that little bend/release lick by using the neck. They saw me do it and freaked out, they'd never seen or heard of such a thing. I am quite careful about how much I push it though. On the other hand, I have a Custom Shop Telecaster with a very flamey maple neck, and it just will not bend at all. No "give" whatsoever.

What a bunch of pansies.

You aren't bending the neck into a half circle, it's less traumatic to the guitar than putting it in the case and tossing it in the backseat of your car.

If your neck joint is already compromised because of previous abuse you may have a problem.


EDIT: Les Trems are the fugliest piece of crap you can bolt on to your guitar.
W

I've bent the neck on my epi G400 just to see. Seems like a bad idea. Haven't done it on my Gibson. Probably wont.

cerebral gasket said:
There’s this one guy that is most famous for playing a Flying V that is painted half black, half white that flexes the headstock to create a vibrato effect and does it really well. I have seen interviews in the past where he explains that the headstock broke off and each time it was repaired the guitar was stronger that it was before. I am not recommending to flex the headstock on your own guitar.
Click to expand...

That would be Rudolph Schenker of the band Scorpions.

Bob Womack said:
That would be Rudolph Schenker of the band Scorpions.

zone47 said:
You know, like at the end of a phrase to lower the sustaining note pitch a bit? It's kind of a cool sound. The only thing I worry about is the neck snapping off, but other than that, it's a cool feature because the SG neck is so lanky that it probably doesn't mind.

I wouldn't ever do it on an older SG with the more fragile neck to body joint.

The other thing is at the end of a phrase or song, I'll grab the neck at the nut and then the body near the strap lock and then shake the guitar lightly for a cool vibrato effect. I think I saw Pete Townsend do that one time... it's another cool hidden feature of the SG.

It's probably not a good thing to do if you don't have a good feel for what is safe for your guitar, but just saying it's one of the reasons I like playing a SG.

Hell to the effin’ nah... my wallet would sweat with every shake I’m sure of that.

Well now. I saw Michael with UFO open for the Doobie Brothers on Nov. 1, 1978. Loved the Doobies and enjoyed Skunk Baxter, not so much UFO. BUT, it was the first official date between the lovely lady who became my wife and myself. Still happily married despite UFO!

AngelDeVille said:
What a bunch of pansies.
Click to expand...

Don't hold back! Tell us how you really feel. lol
Psss. I feel the same way.


AngelDeVille said:
Les Trems are the fugliest piece of crap you can bolt on to your guitar.
Click to expand...

Now THAT just isn't true!
Even I'll admit that my Stetbar II is pretty frick'n fugly.
And you aint seen Stetsbar ugly until you see a Stetsbar on a Strat! And if I can get technical with your "fugliest piece of crap you can bolt on to your guitar" wording, this 'Bolt on" addition is hideously beyond belief FUG-LEE. 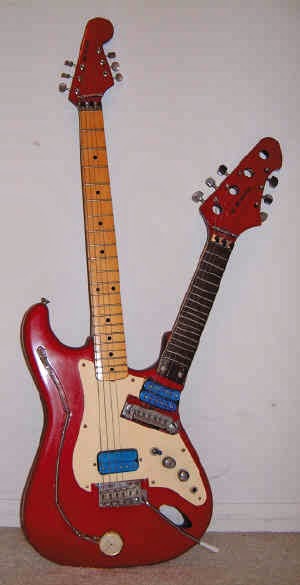 That has ASS written all over it.

The other thing about the title of this post disturbs me a bit too. Given anyone can purchase a new Strat for $650 or less, there is none such thing as a new Gibson SG for less than $970. With that said its hard to associate the phrase “poor man’s whammy bar” with any Gibson SG owner. It just disturbs me to consider using the neck of a thousand dollar or more guitar as a means of replicating a tremolo effect.