NGD (or, "In Search of the White Whale")

Call me a fool, call me a dreamer, call me whatever you like...

...just don't call me Ishmael (since it's not my name)

I've had some serious GAS for a white SG for a while now.

I came close to finding The One a year or two ago:

I bought a husk from The Stratosphere. I've actually bought a few from them, and on average had good luck.

This one, though -- for reasons too lengthy to get into here -- just didn't "do it" for me.

It sounded great, looked amazing... it just didn't go the 100% I wanted it to. And in my accumulating years (notice I didn't say wisdom), I've made a concentrated effort: if I don't absolutely love a guitar, I should move it along.

And so, despite any efforts on my parts to make this one a "keeper," I ultimately threw it back.

In the meantime, I bid my time.

I knew what I wanted: a white SG, preferably a 61 because of the neck, but definitely had to have a small pickguard. Binding would be idea, as well -- I came close to a Special here or a Melody Maker there -- but never pulled the trigger. Patience would win out... probably.

A few guitars come into my collection, and a few go out (this money gets puts into a NGF -- New Guitar Fund -- tell me I'm not the only one who does this

I scour the internet. I set up keyword notifications on popular music gear sites.

One pops up on Reverb: a 2013 White Standard in mint condition. Before I had the money enough in the NGF, it was gone.

Another sighting: a 2007 61RI. Same story: by the time I had the money for it, someone else landed it.

I find this one, possibly via dumb luck:

Seller had it listed as a 2004 SG Standard. No mention of the color, which is why it didn't pop up on my notifications.

I take a closer look.

Yeah, that looks sweet. Got the small pickguard, which I like.

Hmm, that neck joint looks mighty appealing (and, contrary to the listing's description, not very "standard" to my eyes).

I take a deep breath, and make the plunge.

Needless to say, after pulling the trigger, I awaited it's arrival like a kid at Christmas.

I had a feeling the listed year of 2004 wasn't right. Google image searches didn't help much, but I couldn't find much info about white Standards made in 2004.

... at my apartment's leasing office. And they close when my work closes, meaning I'm gonna have to wait til the next morning to pick it up, and the next afternoon til work is done to actually open it.

But wait! Lo there do I see the man who works in the office! Staying late to finish up his tasks, I rap on the glass to get his attention. He lets me in, I grab the package, and we're off to the races!

The bad news: this thing is encased in the most bubble wrap I have ever seen in my life. Here I am, a grown man, arguing with yards of bubble wrap in my kitchen, trying to unwrap this darn thing...

The good news is pretty much everything else.

(of course I'm grateful for the intense packaging job -- this event's re-telling has been dramatized for, well... dramatic purposes)

The guitar arrived safe in it's case.

And it looks gorgeous.

It's not a Standard.

Which, from my research, would indicate it's a Guitar of the Week (otherwise known as GOTW on forums).

Of which they allegedly only made 400.

So that's a nice bonus.

The other good news is, like I said: everything.

Put new strings on (despite arriving nearly in perfect tune), gave it a setup to my preferences, and it plays great... dare I go as far as to describe it "fantastic?"

Man, I'm over the moon on this guitar. Patience paid off I guess, with a bit of luck and good timing thrown in for kicks.

Guess I should probably stop typing about it now and play it, huh?

Please forgive the terrible Moby Dick & fishing references... to make amends for those, here's some gut shots I took while re-stringing & setting it up.

I had actually planned, before buying, to "go gold" with this one too -- hardware, pickups, tuners, etc -- but now that I have it in my hands, there's no way I can do that. It's just too perfect!

Knobs... well, they're easy enough to change. I might, eventually... but I'm in no rush to modify this one at all right now.

It looks like the knobs are correct, just the inserts have fallen out or have been removed.

Yes you certainly scored and have a real gem right there!

Congrats, and Happy NGD to ya!

Congrats on your new purchase! Looks absolutely fantastic! Glad it sounds great also, sometimes the best things in life are worth waiting for!
S

Congratulations! I do love white SGs :)

congrats, she is a beauty!

Nothing is wrong with GASsing for a white or any color, model, year SG. I guess we all happy to see the dreams comin' true.

What a beautiful guitar. White is nice. My first SG will be here tomorrow a Black 2007 SG standerd. I can't wait. I joined this forum tonight liking what I've seen.

Congrats on a truly beautiful guitar!

Beautiful !! I wouldn't change anything just yet either

Congratulations! I used to have a GOTW#26 just like that, it was a great guitar. I modded it a bit and ended up being truly a looker 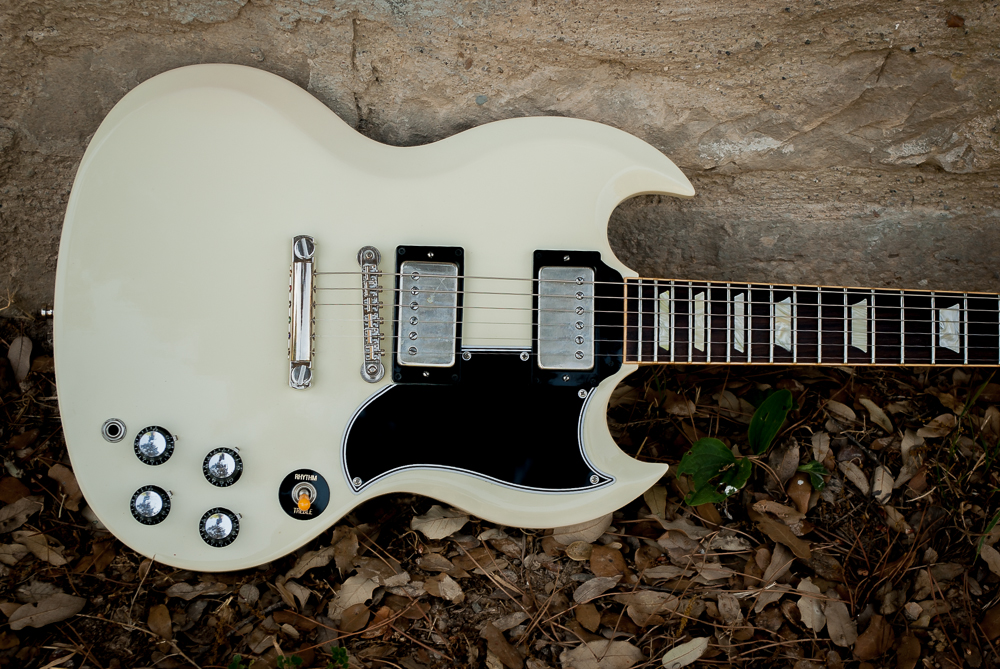 How's the neck on yours like? I ask because mine was a fair bit heftier than your usual 60s slim taper, which was a surprise (other 61RI I've played have pencil-thin necks, which I love too)

HackeIommi said:
Nothing is wrong with GASsing for a white or any color, model, year SG. I guess we all happy to see the dreams comin' true.

Be happy and play it like a crazy. Don't mind what ppl call you. If you mind, I'm proud to call you as a "winner"
Click to expand...

Heh, yeah, that was me trying to be funny or something (keeping with the whole white whale/Moby Dick thing). But ha, I doubt anyone on THIS forum is gonna call me crazy for buying an SG!

bwotw said:
How's the neck on yours like? I ask because mine was a fair bit heftier than your usual 60s slim taper, which was a surprise (other 61RI I've played have pencil-thin necks, which I love too)
Click to expand...

It's perfect! Oh, you mean actually describe it?

It feels on par with my 2002 61RI. Compared to what Gibson calls their "60s thin taper," I can only give you my take on it: in my opinion it's a little thinner than the "thin taper," and yet somehow it feels wider. Really hard to actually quantify how or where exactly... but it suits me just fine! I could probably do a side-by-side comparison, but this one is still too new for me to set down and pick up something else just yet.