OK.
Out of all the equipment you have parted with in the time you have been playing
What are the 5 Guitars/amplifiers/effects/pieces of studio gear etc. etc. you want back
more than all the others. You know, the real "What was I thinking when I sold that?" stuff?

70 Monte Carlo was a beautiful ride that I never should have got rid of.

Sorry, I stopped getting rid of guitar stuff & turned to simply hoarding everything! LOL

ok, I could have said that Small Stone Phaser but I miss that car more & thought you could always use a good laugh. And I do want that car way more than that silly Phase Shifter. I just can't play it on stage but, I could make some beautiful sounds with her!

Coming up with 5 big meaningful losses I want back was harder than I thought.

I can't come up with five things, but I wish I hadn't given away my Guitar Player collection. I had all the mags from 1989 through 1999, when I stopped subscribing. Would have been really cool going back now.

Suffice to say I wouldnt NOT take any one of them back, for any number of various reasons

i have 4...
if i think of a 5th i'll add it. seems i'm mostly satisfied with my gear evolution over the years..

this is the guitar i probably most regret selling. at the time i wouldn't get along with the tone, but man was it a well made and attractive guitar. if only i had gotten into pickup swapping sooner...i'll probably have to try another someday

i generally prefer to use amp distortion, but i tend to dial towards cranked ratty tones. needed an LED mod for sure, but the decision to sell was definitely made too hastily. fortunately i have filled the rat void with a fantastic clone/custom job from Floridian FX. still it would be nice to have the original for sentimental value i'm usually not a compressor guy, but this was a pretty cool pedal. i used it more as an eq/tone shaper. quite a power hog with a 40v requirement - because of this, i had to choose between it and the ehx worm (26v) for my live board. the worm won out. got good resale for this one, but i often wish i had kept it. 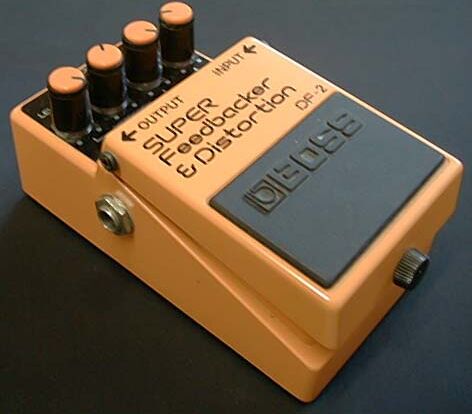 i had a japanese df-2 for a hot minute a few years ago during a period of pedal craze. it was purely a novelty buy, mainly triggered by my love of the band Boris, whose album "Feedbacker" was inspired by this pedal. it's essentially a ds-1, but with the added feature that when you hold your foot down on the pedal, it generates sustained feedback. ultimately about as useful as it sounds/i expected it to be, so it didn't stick around. and yet the novelty pull remains strong with this one...

I've only sold one, Epi SG special, the cheap 2 HB one.
I shoulda kept it as a dedicated slide.
But I havent been at this long and havent bought a metric shiton of gear.

I think I'll just hoard to avoid the regerts.
ya thats right, regerts.

Hey David!
Longtimenosee!
All is well?

Relic61 said:
70 Monte Carlo was a beautiful ride that I never should have got rid of.

I hear ya on this...It pained me just to see your post. I let go a Mint 1972 Chevelle. What a mistake!!! Drives me nuts every time I see one.

I still have all the stuff I bought when I was a kid!

Even when I sell it things they seem to work their way back to me.

I have only one to make this list. Without a doubt, it was my Fender 75 amp that I let go about 20 years ago. Got it brand new in 1980 (?). This one came from the factory with a 12" ElectroVoice. Very advanced amp for Fender at the time. I didn't know how to use the amp's full potential. I would today, though. Think I sold it for $150. Within seconds after it was carried away from my presense, I was succumbed with sellers remorse. This thread has brought back those old feelings...

1. 1996 Gibson Les Paul Standard, Cherry Sunburst. Best damn guitar I ever owned, up until I got my 2016 LP Traditional (which I got specifically to try to replicate that Standard).

2. 1986 Marshall Studio 15. 6V6 Power, built-in attenuator and XLR out, Vintage 30 speaker, and more. What a great, great amp. If I ever run across another a good price it will be mine.

3. 1973 Fender Pro Reverb. The 40-watt version of the Twin, and able to get good power tube saturation at volume levels that didn't knock your fillings out.

4. 1983 Fender Stratocaster Gold Elite. Absolutely killer Strat, and in my foolish youth I just couldn't get past the "unusual" look of it compared to "normal" Strats and sold it.

5. 1992 Gibson Les Paul Studio Lite. The one with the balsa wood center block and ceramic pickups. Man, what a great-sounding, great-playing guitar, and as light as an SG. Even looked cool in dark blue finish.

DBB, nice to see you, stranger, Hope all has been well with you.

I may cheat on number 5 as a person really can't be given away. And cheat I will by bending the rules.

number 5. A 1967 Firebird I could have bought for $500 back around the time I was 16. I lived in an apartment with my mom n stepdad and had nowhere ready to restore it. It was a nice neighbor lady's car and if I had had that $500, I am sure she'd have let it go to me. She did let me test drive it and all so it is my own dumb dumbness for letting that opportunity slip thru my hands. 67-69 Firebirds and Camaros were and always will be my favorite Chevy Muscle cars.

I have actually disconnected the Fender speakers and powered my Marshall 1960A and it kicks ace.

DBb those JBL speakers are junk, I'da gotten rid of that one too.

The only thing worse that them are those awful EV's

Not too difficult a task.