The little guy in the shorts seems to have quite a bit of energy...

This one is damn long, but Robby Krieger does about a 4 minute solo and it's awesome... With his '67 Standard too!!!


I could be wrong, but I thought that was an SG Pro?

Either way, thanks for posting the video.


That solo done entirely fingerstyle with no pick was really cool. Very melodic.

Well, well, well...look at what I found. Not only does this video have an SG and an EB-3 bass, it also includes Bonn Scott in a way I never thought possible.

You may never think of Bonn Scott the same again.

smitty_p said:
You may never think of Bonn Scott the same again.
Click to expand...

That was out there, and yet it is a fairly straight cover of these guys:

[ame=http://www.youtube.com/watch?v=bb_OEaHfWII]Foundations - Build me up Buttercup 1969 - YouTube[/ame]

smitty_p said:
I could be wrong, but I thought that was an SG Pro?

Either way, thanks for posting the video.
Click to expand...


We could also post this as: "Girls with SG's"!

[ame=http://www.youtube.com/watch?v=Mx3VDpA1E2U&feature=related]Alice Cooper & Johnny Depp - School's Out / Another Brick In The Wall @ the 100 Club - YouTube[/ame]

Cool video, sgtbeefheart. Is that you playing the SG Junior?! ;-)

Wait, nope...it doesn't have the vibrato like yours. Either way, it's still cool to see a Junior rocking in public.

Unfortunately no, it would have been cool to play with AC.

It's been awhile, but I spotted me another SG out in the wild...

A little Derek Trucks action here, boys and girls. I also like seeing Bonamassa on an ES-335.

Here's a very old video from Fraternity, with a little SG action. The SG solo starts at about 1:57, but the camera is on the EB-3 bass. Then the camera switches to the SG.

I just caught this on TV.

Actually, they had the whole 1976 concert but this was the last tune.

Here's another tune from earlier in the concert:

Kevy Nova said:
I always loved this song, but disliked the strings and horns. I'd like to hear a more raw version of it.
Click to expand...

That a cool coincidence as I thought the horn parts made the song pop for the era & yet I too would love to hear a raw version without the horn syncopation & melodic counterpoint. I can actually remember riding on my gradeschool bus & this coming on the radio. It always made me feel good & took me someplace. It was one of the songs that made me realize how special & magical music could be at that young age. I wonder what would step out of the mix in their absence? Sadly, we may never know unless something exists somewhere. Now I wonder who did the horn arrangement? Was this a Doors version of a George Martin or Phil Spector producer type or did Ray or Robbie come up with them?

Here's the back of the Soft Parade Album 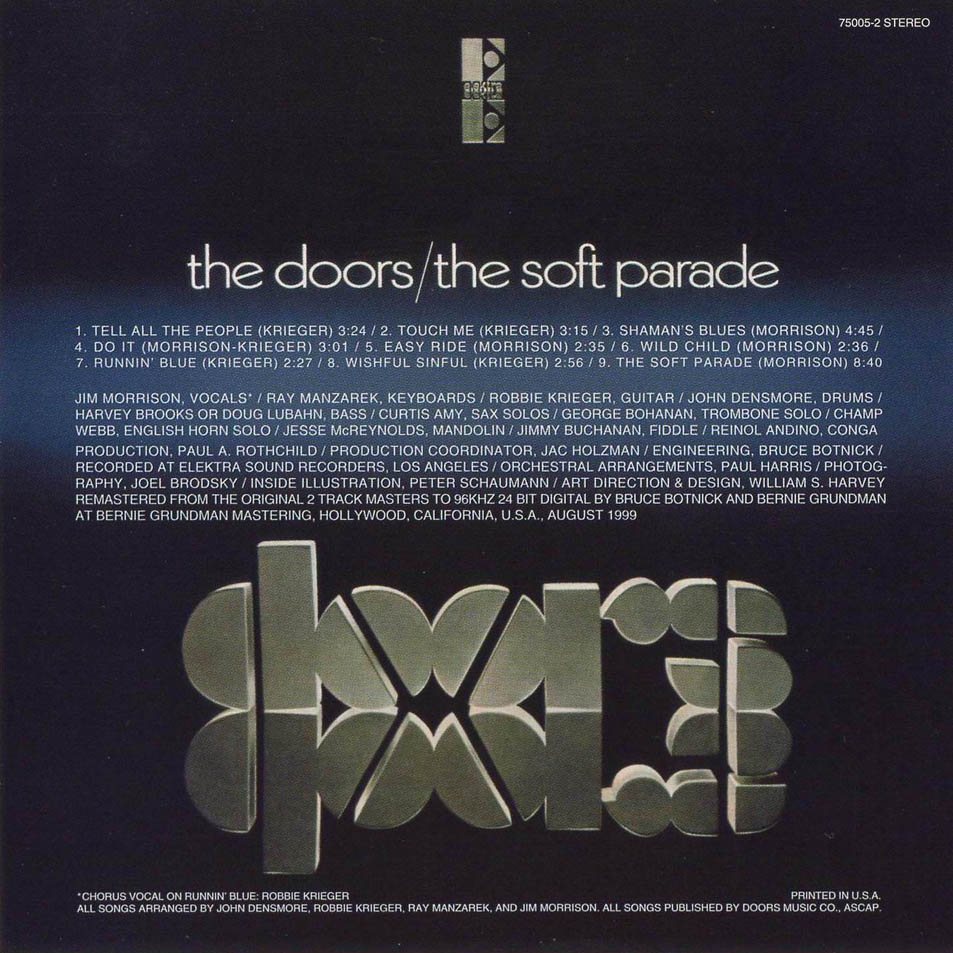 smitty_p said:
Alrighty. I mentioned in another thread that Keith Urban occasionally plays an SG. Here's a neato video compilation of a bunch of Keith Urban clips where he's playing a few different guitars. The SG content starts at about 2:46 and goes to about 3:50. I like the tone he's got going on with it.


Thanks for posting this... it's great music and great showmanship.
I thought the SG sounded excellent of course.. very cool

It looked like one of those Lesters he was playing was a trapeze-tail gold top
like an early '52 that had been made playable somehow...

I caught this on TV last night.

Thanks Smitty. As a kid I bought 2 tix to Styx and wasn't old enough to transport myself to see them. Back about 8 yrs ago I was blessed to see them for free at Daytona Bike week. YAYYYYYYYYYYYYYYY Styx

smitty_p said:
I caught this on TV last night.

Let me tell ya a little something about Blue Collar Man Smitro,.. Akhemmm..

as you may know, I have several musical irons in the fire. In one venture, I am lucky enough to get to play in a fairly successful cover-band

who's material is largely a dance formatted R&R, R&B, Latin & some newer country mix of songs that are selected for dance-ability (new word) popularity & their fun factor.

One of the highlights of a typical evening in this band is getting to kick out our rendition of the above mentioned Blue Collar Man (or, BCM) & really bringing it to the crowd with some heartfelt in your face enthusiastic authority like we own that mo-fo. We got a real strong female singer that kicks this song in it's ass as well as a real deal keyboardist (not a 2nd guitarist on a Casio) that really nails his patches well which makes playing songs like BCM sound believable & really come alive. But the best part about BCM for me is that I get to crank my amp into that righteous sounding guitar zone that don't get touched on otherwise because of the bands material. (And on the plus side, I get to do it all without dirty looks being darted at me as if to say WTFDUDEREALLY? How 'bout Turning down Guitar Hero wannabe).

Let's elaborate on this zone for a minute. Yah, that zone, the tone zone. The place where the magic starts to happen. Where you're Cookin with gas & firing on all cylinders man. Ah yes, the zone. Ye Ha! The amp is turned up as loud as she can go without turnin to $#!T while fartin or sputtering or turning to muckety muck. A sharply played chord sounds powerful n rich &, fat n full while still being defined and punchy. If anything is left to ring & sustain, harmonics will seep in & morph with chord & note alike until taking over & eventually looping into controllable new textures conjured from the magic that is happening from all the combined ingredients coming together just right. That zone. I know there are other zones to be found in guitar world but this is the zone we're living in for BCM baby. Just a little bit a heaven for a guy like me man. Especially given the rest of the nights musical dance offerings which are all cool enough but no BCM by any stretch.

Anyway, the beautiful thing about Blue Collar Man is it almost always catches people completely off guard at first and then it totally slays them by the time the song ends, leaving near everyone pumped up n yellin for more & literally screamin like maniacs by the songs classic Rock N Roll ending.

We actually got to play that song tonight towards the middle of the last set with the same above results. I'll tell ya true brother, you can keep the money for the gig and just let me bask in all the fun and glory that comes along with playing Blue Collar Man live for and audience. From the sheer fun factor involving being able to play a fantastically written song like BCM itself and the smokin players bringing their tones & talents, to the guitar, amp & gear optimally operating in that zone, all adding to build the crowd into a screaming frenzy of appreciation. Like a poignant Visa commercial, some things are just priceless.

Yes Smitty. BCM is a great song. Thinking about playing this song in a band, I am consciously thankful for & sincerely appreciate every opportunity I still receive today to play songs like Blue Collar Man and for still being able to make it all happen musically for others as well as myself. Ahhhh. Heaven.

Thank yall for indulging my enthusiastic rant. Rock On.

Thanks for the story. I really caught what you said about "fantastically written." Isn't it a pleasure to listen to a really well-written song? When the lyrics actually "say" something and the music is interesting and the musicians are tight, you just can't help but listen.