I really “want-to-want” a Gibson 355, but they never feel as good as my Gretsch.

I have even debated parting with one of my SG’s to obtain one. But anytime I am in a big name store that carries them they don’t “wow” me. Love the looks, love the sound, never feels right...

I will post some photos of my hollow body soon
G

Col Mustard said:
Funny, I later looked at an early picture of the young kernel still in high school,
playing in my first band with my first electric guitar. (a Pre-War Gibson ES-125
with a Charlie Christian pickup)...
Click to expand...

My semi-hallow Gretsch. Love this Beast, amazing tone plugged in, great sound even when it’s not. Mine has the floating bridge, which I would have preferred the mounted version. All that said, it’s a keeper. Had it about 16 years now. 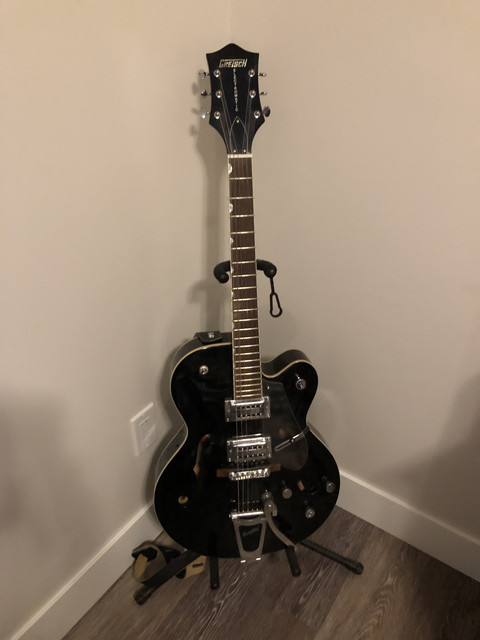 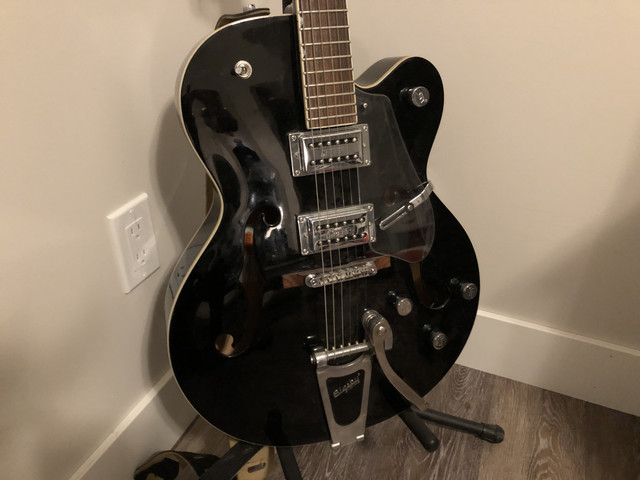 Location
The St. Louis area on the Illinois side.

pancake81 said:
I really “want-to-want” a Gibson 355, but they never feel as good as my Gretsch.

I have even debated parting with one of my SG’s to obtain one. But anytime I am in a big name store that carries them they don’t “wow” me. Love the looks, love the sound, never feels right...

Keep looking. You'll find one. I ordered mine and loved it when I first picked it up, but as I have a good relationship with Gibson they'd of kept sending them to me until I got one that was right.

I've played some dogs, and was in possession of a dog that played horribly but sounded incredible for a few years. It was a '72, and I couldn't ever get along with the neck. I wish I still had it, if not for the sheer sentimental value, but I didn't like playing it.

Point being, keep looking. You'll find a phenomenal one!

My semi-hallow Gretsch. Love this Beast, amazing tone plugged in, great sound even when it’s not. Mine has the floating bridge, which I would have preferred the mounted version. All that said, it’s a keeper. Had it about 16 years now.

I have always felt that one day you put away your Floyd, turn your amp's gain down from 11, and play a simple hollow body guitar, and rediscover the joy of guitar. As of today, I have 8, and here they are:

Ibanez AS73, Ibanez AWD82 (getting new pickups as we speak.)

For those of you with Epiphone semi hollows, how do you find they compare with Gibson’s?

with SG’s I find the epiphones feel significantly different. The necks more than anything else. slihht sound difference, but nothing major to my ears.

hiw are those 355’s comparing to the Epiphone Dots. The Epiphone Dots go for around $600 around my parts, and the 355’s exceed $5000.
Perhaps I should be trying a few Epiphone’s... thoughts

Some awesome looking guitars on show!
Here's my 1988 Epiphone Sheraton II with by Gibson on the headstock. All Stock 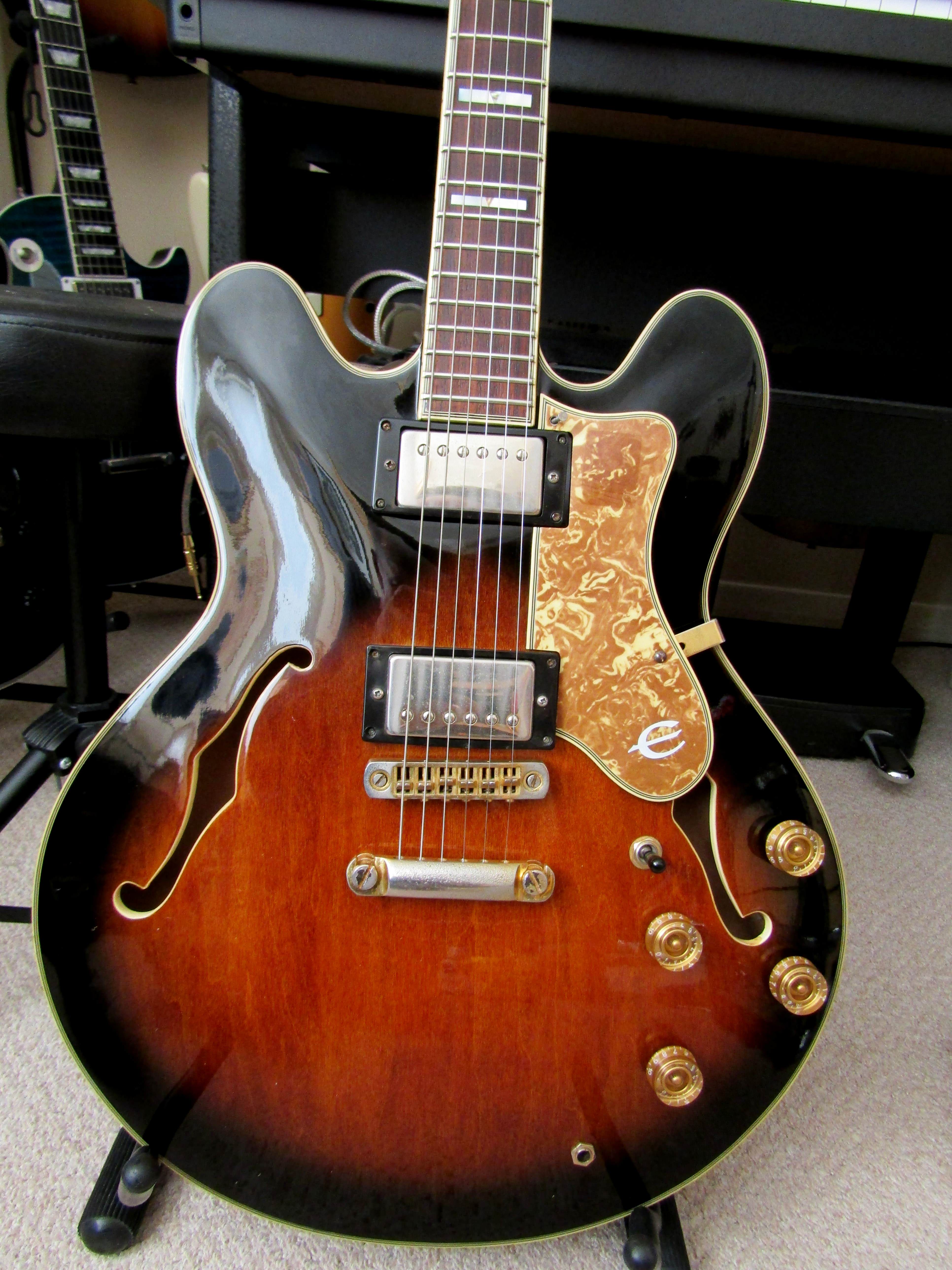 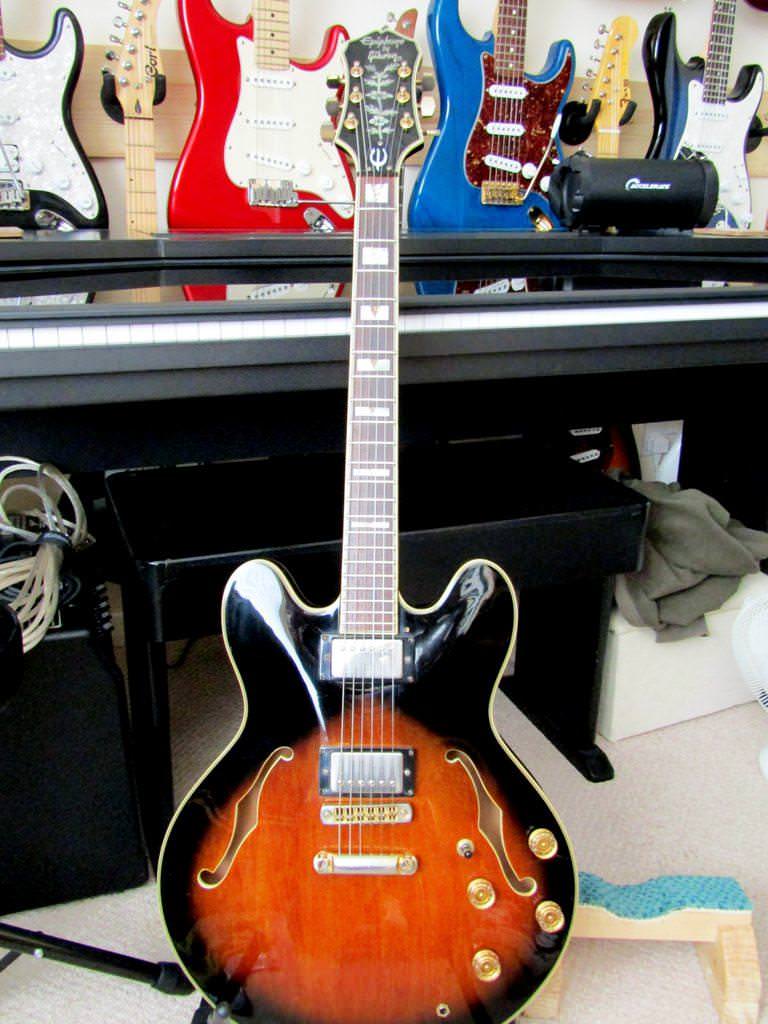 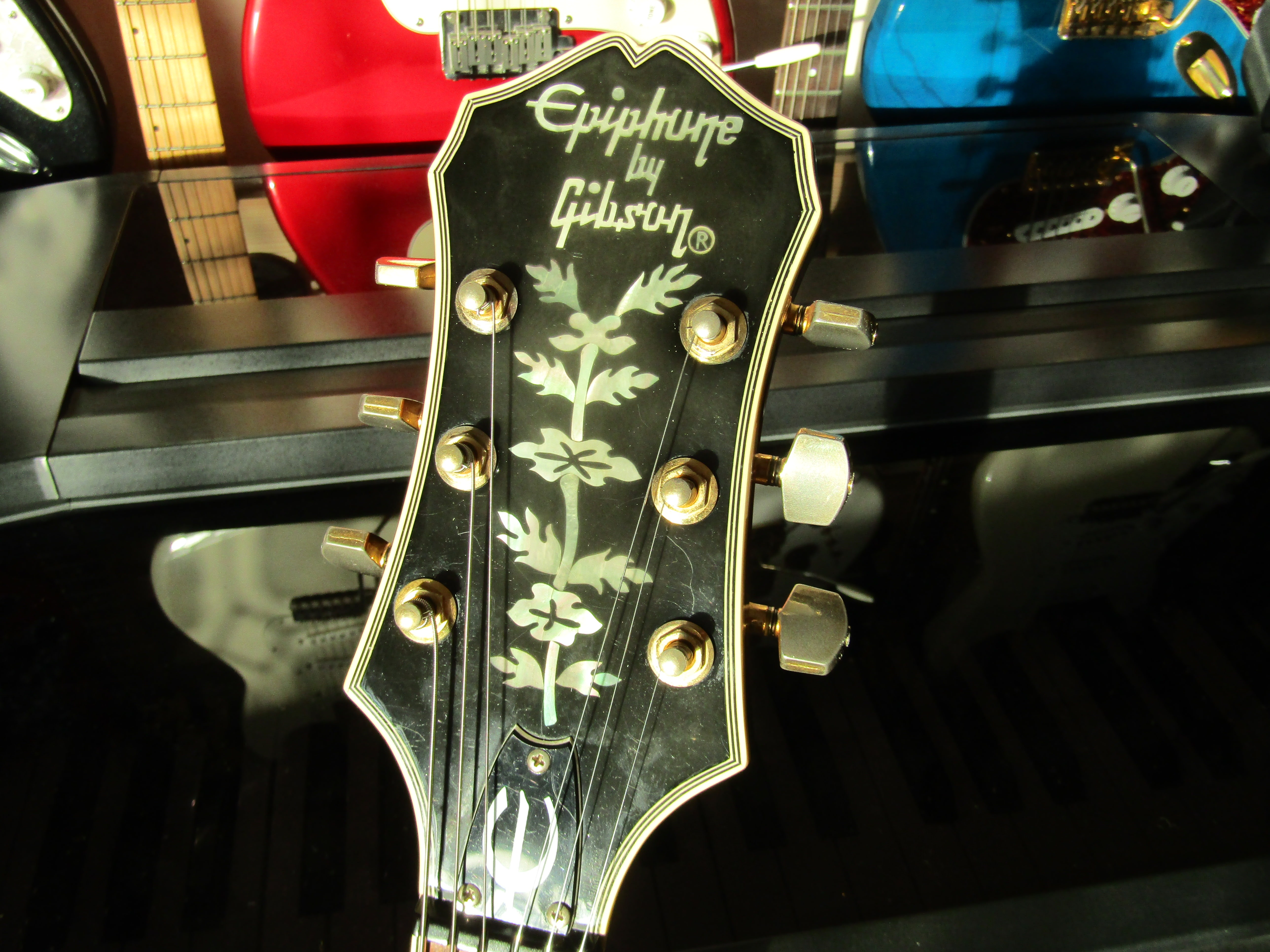 pancake81 said:
For those of you with Epiphone semi hollows, how do you find they compare with Gibson’s?

hiw are those 355’s comparing to the Epiphone Dots. The Epiphone Dots go for around $600 around my parts, and the 355’s exceed $5000.
Perhaps I should be trying a few Epiphone’s... thoughts
Click to expand...

The Epiphone Sheraton II I have, a 85 (?) made in Korea by Samick, will easily compare favorably to a Gibson 335. Some might be better, others not so much. The Sheraton II was the upscale 335 from Epi. Remember, each guitar is an individual, and will play differently. That being said, you do have some MAJOR differences between the brands. Electronics being the obvious one. I like the darkness of the Epi pickups, others hated them. Pots, wiring, etc, are basic Asian production crap. Easily replaced. The hardware is different. I love the Schaller harmonica bridge copy, other prefer the tun-a-matic. And then there is the finish. That old poly vs. nitro debate. I believe it plays a part in the tone, others don't. Biggest issue I have with Epi is the amount of finish they put on the neck. It tends to be on the heavy side.

Now the Dots were on the lower end of the scale. Originally they were the budget line with a faded finish, and minimum appointments. They've changed, becoming slightly more upscale. But they tend to be on the cheaper side of construction and electronics. I never played a Dot I had to have, unlike the Sheraton. Best advice... play them side by side, and see which one fits your hand and sound in your head.
G

Fergyuk said:
Some awesome looking guitars on show!
Here's my 1988 Epiphone Sheraton II with by Gibson on the headstock. All Stock

That sure is purty!
B

Some beautiful guitars in this thread. I recently had my eye on an Ibanez AF71. Just walking around Edinburgh...minding my own business...when I walked past a guitar shop and said guitar was kind of calling me from the shop window. I'm not normally an impulsive feller but I went into shop and asked to play it. I just wanted to see how a semi hollow might play and sound.
I thought that the young shop assistant feller was having a wee jape at my expense when he asked how I would like it to be set up. "Do you want it set up to play acoustically or through an amp"? I replied, "Can it be set up so I sound like Joe Pass"?

Do archtop/semi hollow guitars get set up differently to solid body guitars?

They can be, but setup is/should be your own set of choices, but you know this, having used my recommended setup method!

Biddlin said:
They can be, but setup is/should be your own set of choices, but you know this, having used my recommended setup method!

I see......so I could set up/improve the playability of most type of guitars with your set up method. Solid body....archtop...acoustic....resonator....bass even? I'm tempted to go back to the big smoke and get that Ibanez. It sounded nice through a clean amp in the shop.The young assistant feller said it would sound even nicer with flatwound strings on it.

What you have to decide is: What does "nicer" sound like to YOUR ears. If into playing jazz, then yes, flats would be a good choice. If into rockabilly or more roots orientated, then roundwound would sound "nicer". If playing a lot of different styles, then a set of half rounds might be your thing.

Bert Scrogshaw said:
The young assistant feller said it would sound even nicer with flatwound strings on it.
Click to expand...

I find flatwounds to be one-trick ponies. For most styles, I find them dark, muddy and heavy. 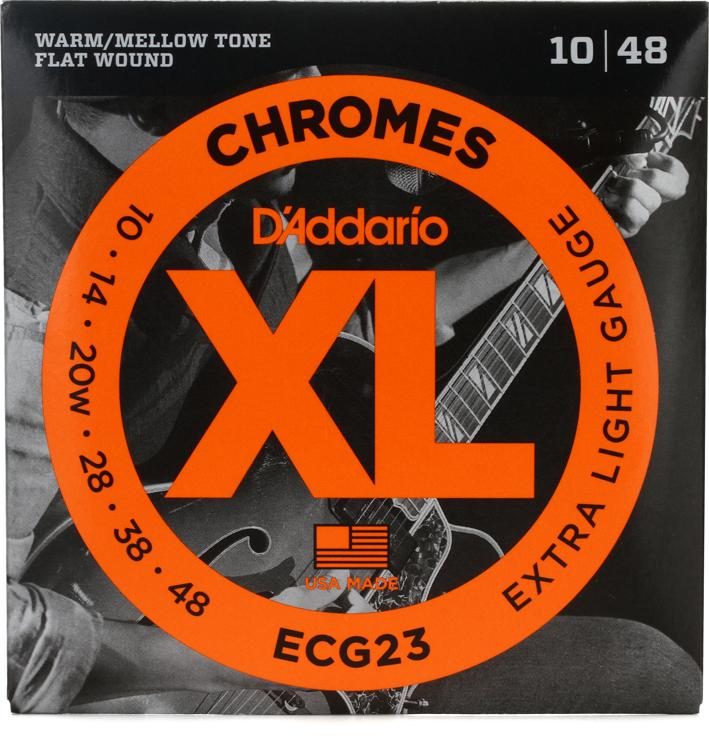 I am a generalist and play any style the client wants to pay for. I have a Les Paul Custom that I used to have D'Addario Chromes on, for use with a single jazz diva client. She has since joined the celestial torch singing chorus, so I now have it strung with NYXLs, my choice for a slightly edgier tone, pricey but long-lasting. 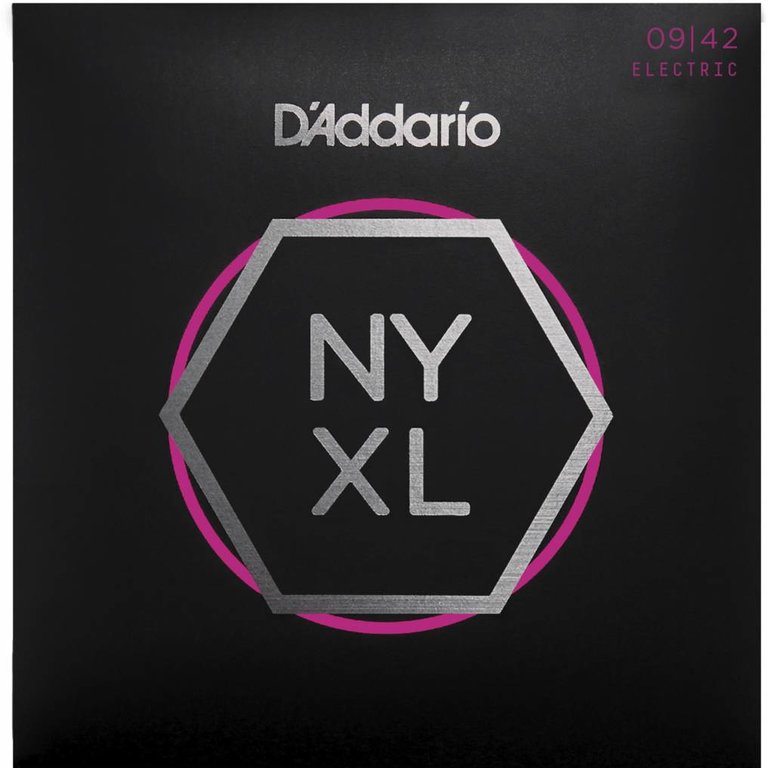 For balanced, mellower tone I like Cleartone EMP strings. They are also not cheap, but last a long time and don't have the sizzling brightness of new un-coated strings which many guitarists prefer. 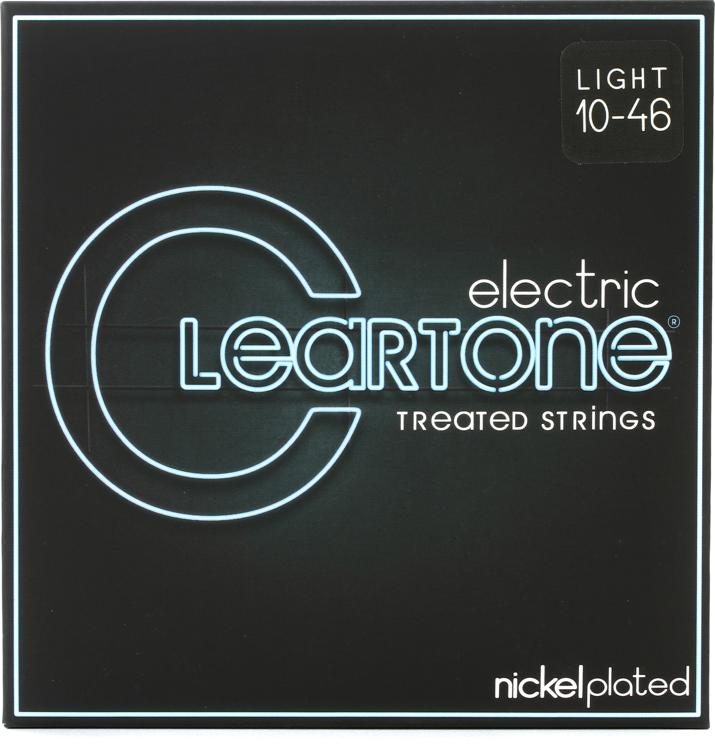 Some pics of my Casino 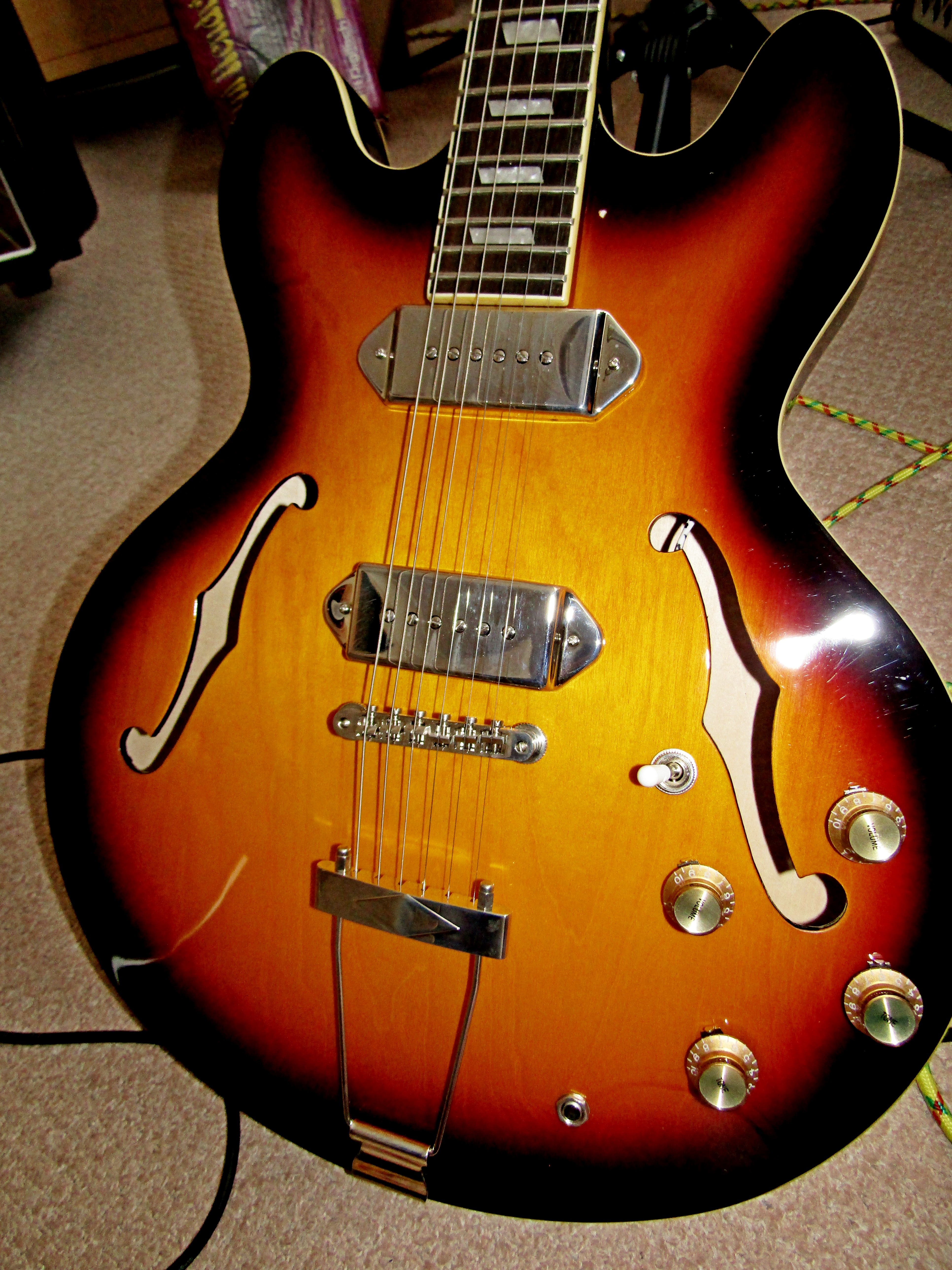 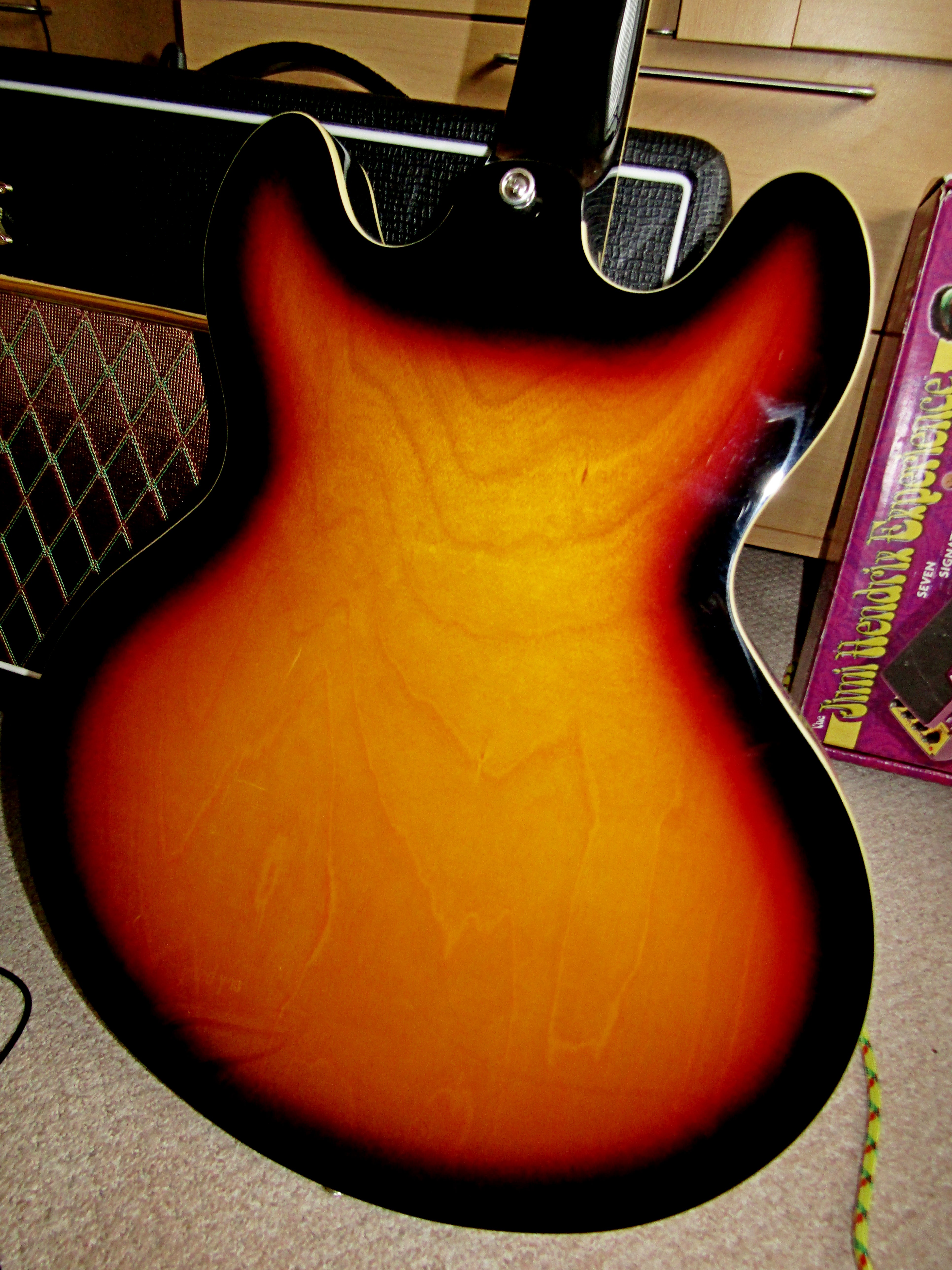 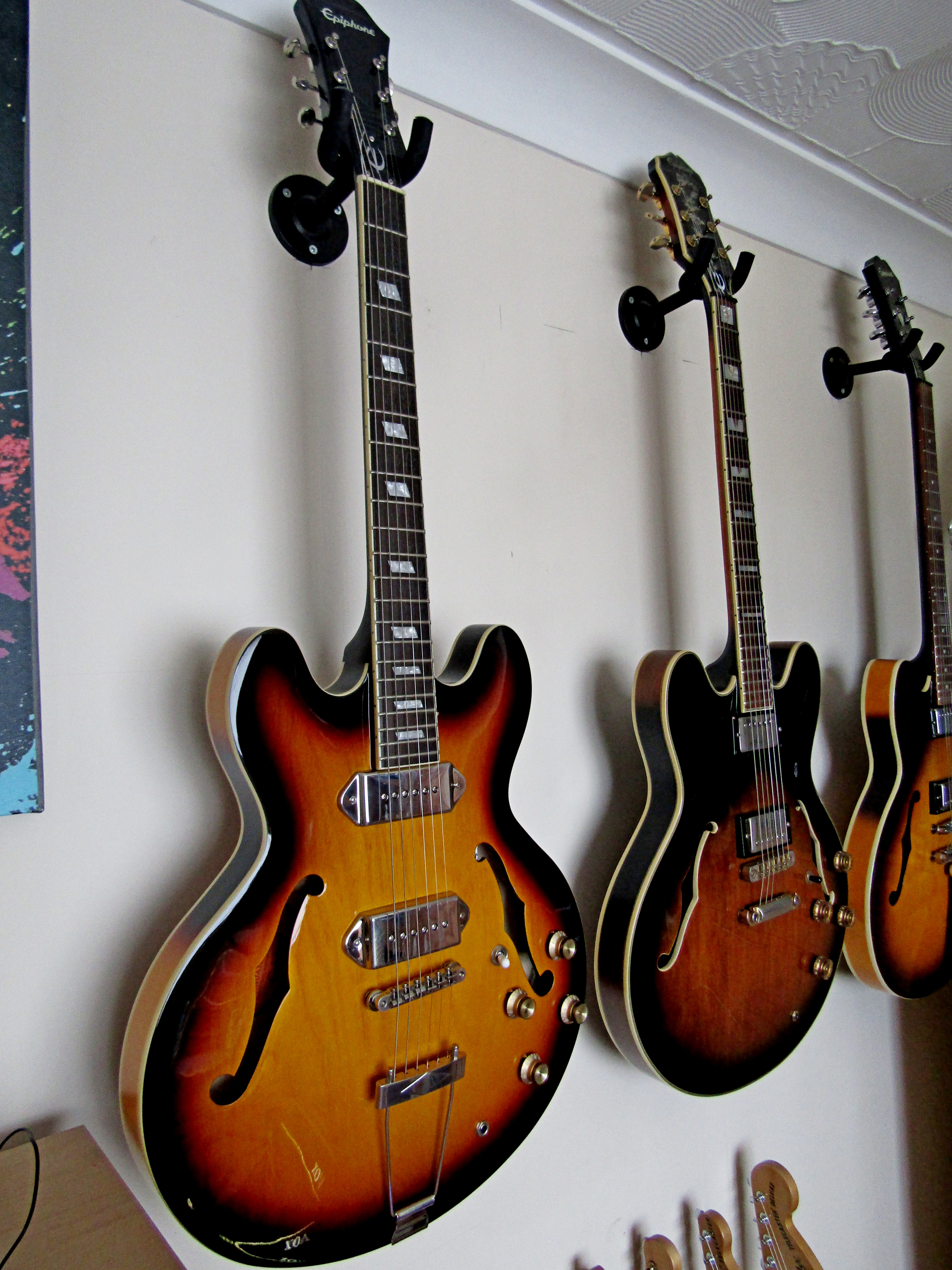 I know, I know... but it's hard to explain in current times
just how uncool that ES-125 seemed to a teenage me.

Nobody was worshipping old guitars at that time.
Old guitars were just old... second hand goods, something
to play my parents' music on... L-7 man...

I was just an ignorant young punk of course.
A year or so later, my dad allowed me to take that Gibson to
college with me. At first he refused, afraid that I'd waste my
time on drugs, sex and rock an roll, and NOT do my school
work. (He was right).

But then he relented, and I took the instrument with me to
play at jams in my dorm. An enterprising sophomore saw it,
and offered me a hundred bucks for it. I took the hundred,
knowing it was a lot more than my dad ever paid for that guitar.
This was 1967, and a hundred bucks cash was a LOT of money
for a struggling student on scholarships.
Later, that guy came and found me in the cafeteria, and boasted
to me and my friends about how he had flipped it for hundreds more.
He laughed at me for not knowing the value of what I had
there.

I've never forgotten the public humiliation of that incident.
I was horrified to be exposed as stupid, in front of my friends.
Later I called my dad and told him I had been offered a hundred
for the guitar, and had taken the offer. My father didn't care,
he told me to keep the hundred. He was thinking it was a
hundred he didn't have to give me for school, I'm sure.

pancake81 said:
For those of you with Epiphone semi hollows, how do you find they compare with Gibson’s?

I think you nailed it right here, answering yr own question.
Gibson guitars are in a class of their own IMHO.
No one debates the quality and elegance of a Gibson ES model
guitar, except the cork sniffers who are capable of paying WAY
TOO MUCH for a fine instrument, and then expect WAY TOO MUCH.

To my way of thinking, the cork sniffer attitude is kind of a sickness.
When there is so much wrong with the world, does it make any sense
to raise hell over a dimple in the finish of yr $4000 Gibson?
Not to me. To me, the concept of perfection is an illusion that people
waste way too much time fussing over.

But of course, I would NEVER pay more than $2000 for any guitar.
I have other priorities... plus I have proven in public that great music
can be played on instruments costing much less. I have proven it so
emphatically that I actually love to be seen playing an Epiphone.
Or my rebuilt Squier bass. *grins
I'm not as good a guitar player as many of my friends, but I get
the job done, and I don't need a guitar that costs as much as a car.

So there it is, IMHO. It comes down to setup, and maybe some
judicious mods. Epiphone guitars may be built with cheaper parts, but
these can be corrected. A well setup Epiphone is a much more useful
instrument than a badly setup ES-335 with a vintage pedigree and a
warped neck.
G

Thank you Col for pointing out that I wasn’t the only “ignorant young punk”. Love your story. Now…if I only could have the ’70 440 'Cuda back that I sold for pennies on the dollar! 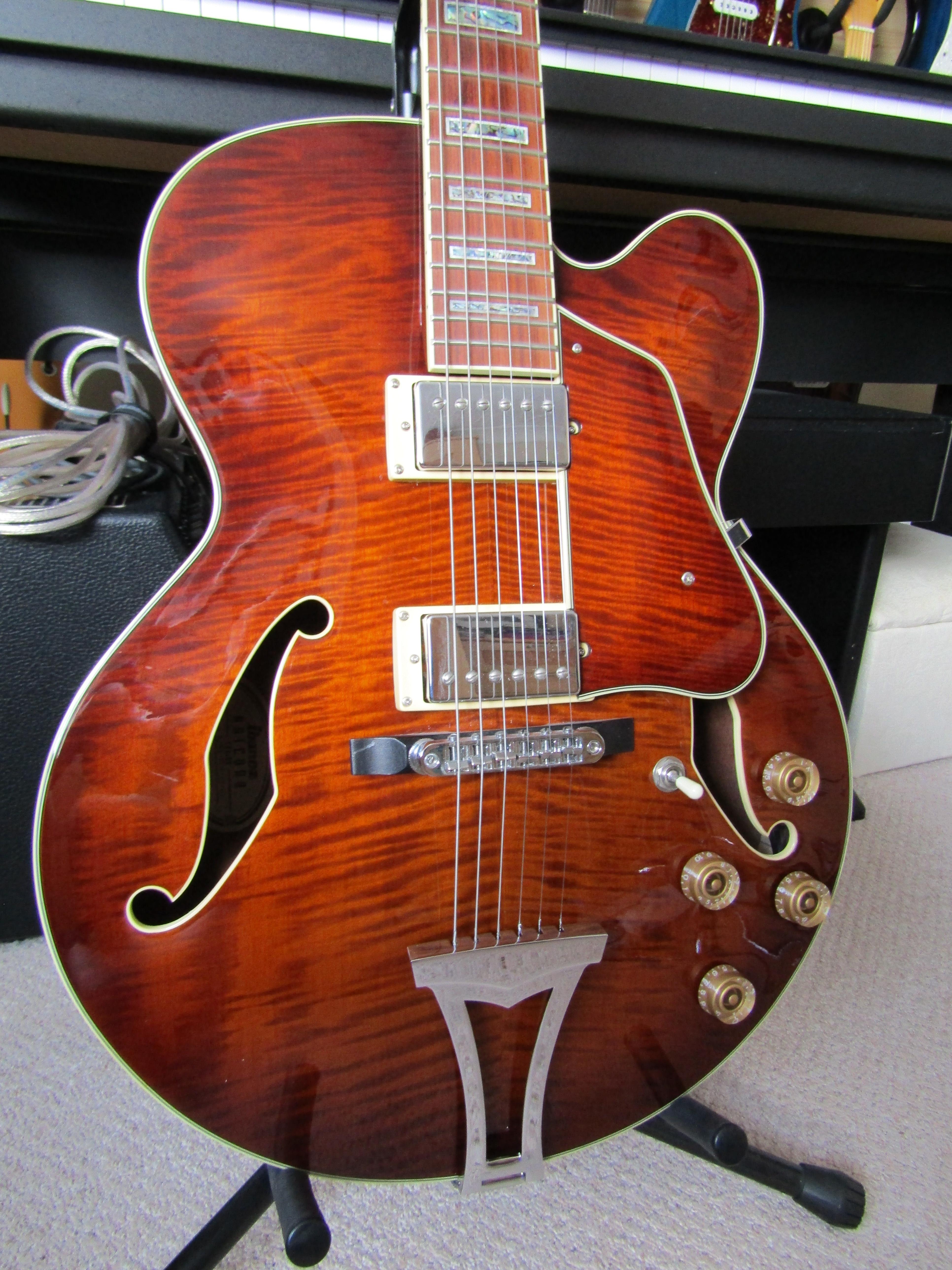 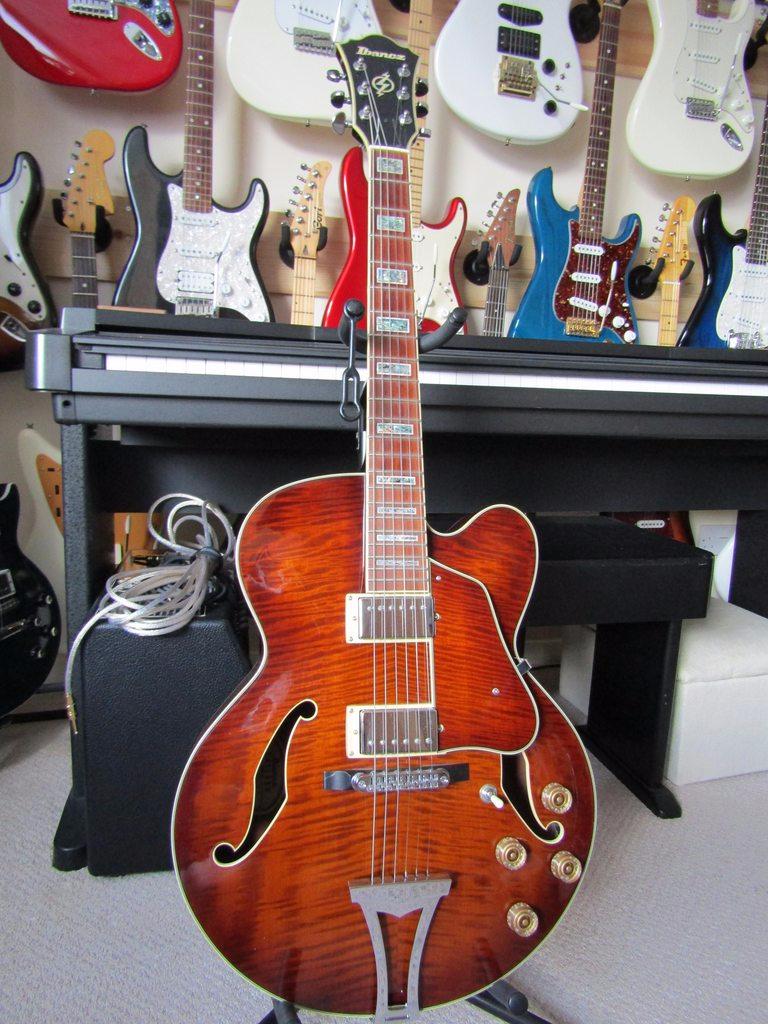 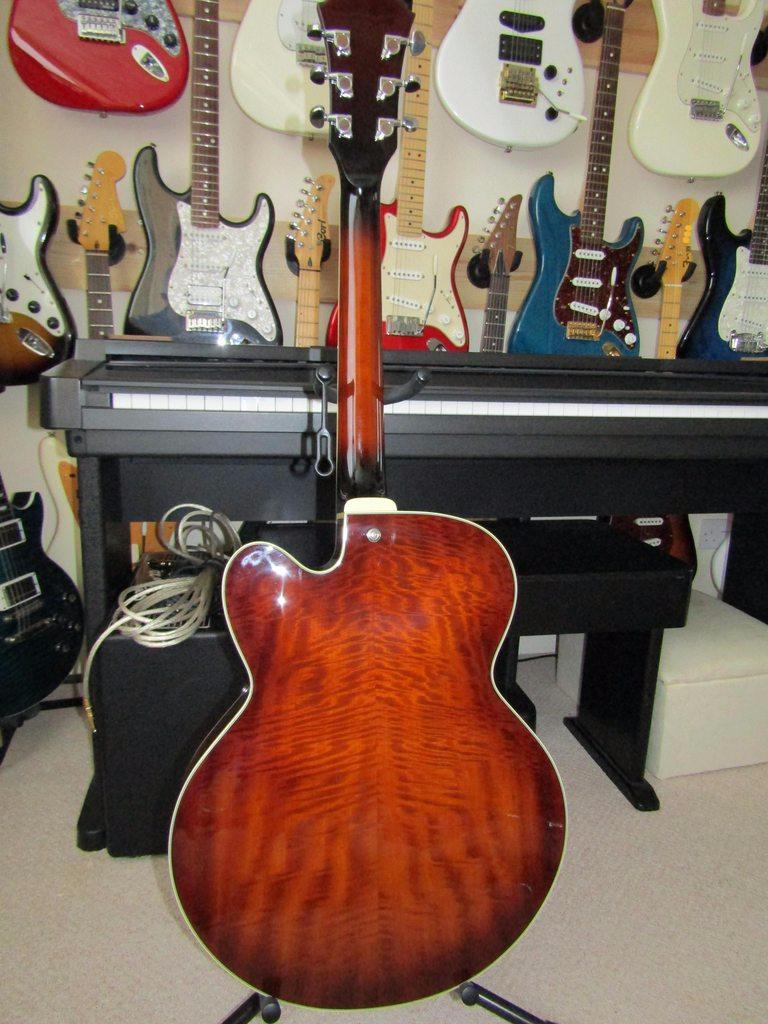 Does this count? it's my Crafter SAT QMOS hybrid guitar 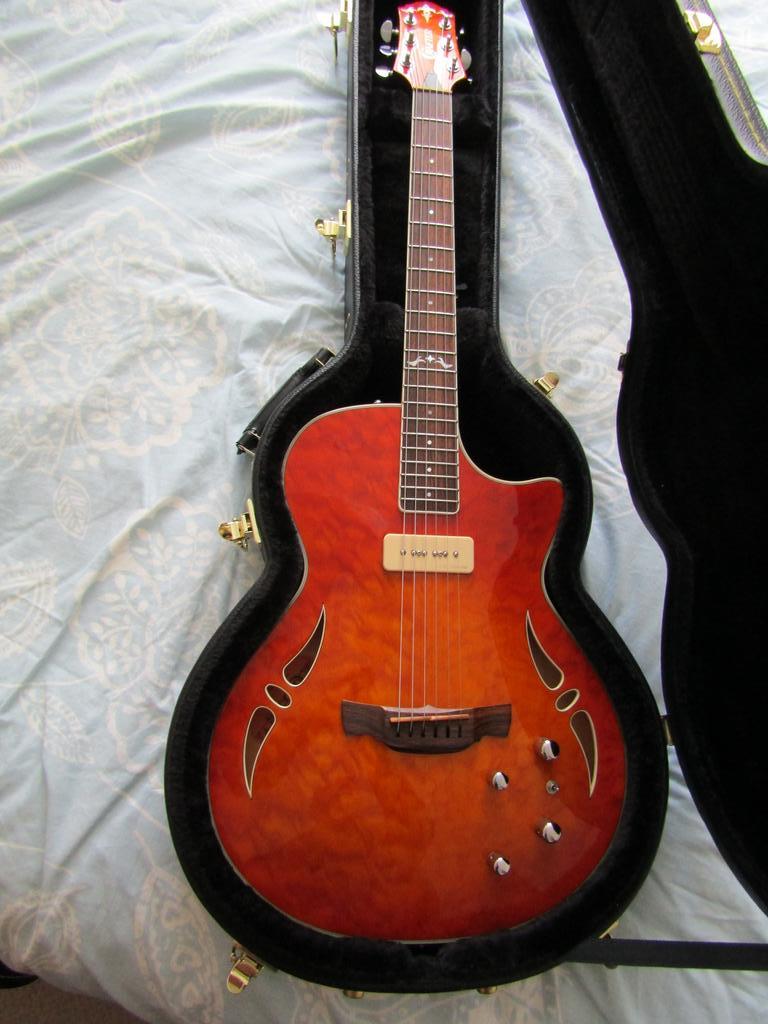 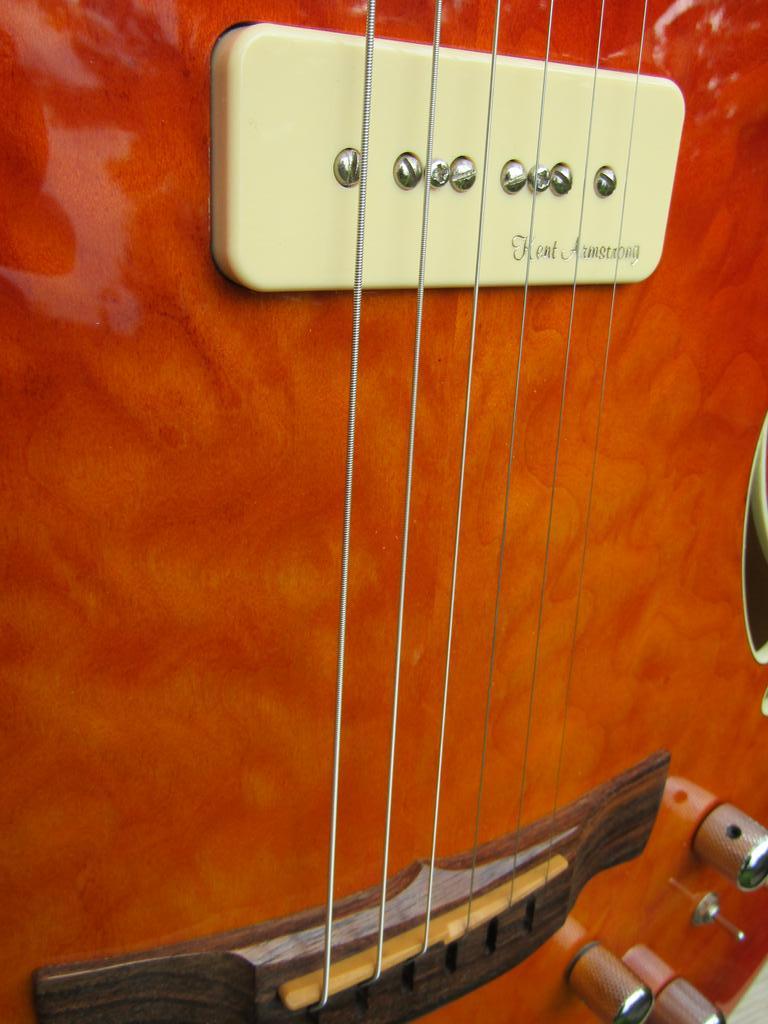 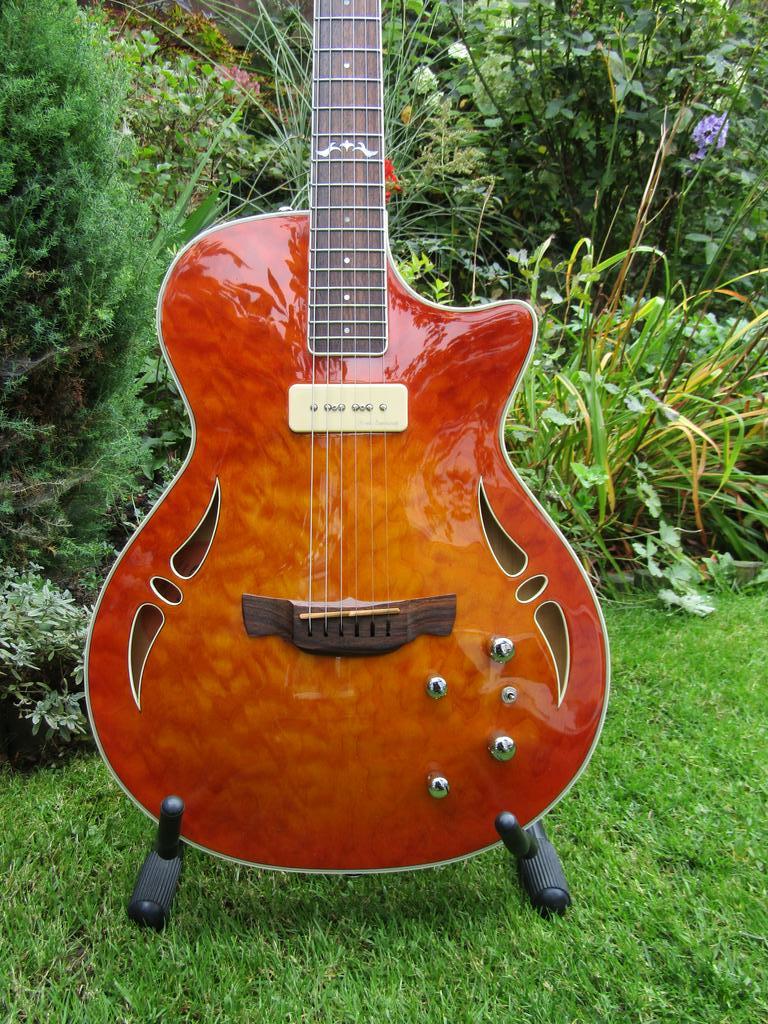